By Ryan McDaniel February 4, 2022 No Comments

In case you missed it, we introduced our new mini-series, Money Minute, on Tuesday. Ryan McDaniel and Somer Dunaway will be breaking down the financial basics in 60 seconds or less and will follow up with a more in-depth look of the matter later in the week via blog post. (Check out Money Minute Episode 1 below!) We hit the ground running with inflation, a topic that is all over the news. and Ryan is going to walk us through this matter in greater detail below. I recently heard the best description of our current economy: All good news has an asterisk and all bad news has a silver lining.  Currently, our economy is doing really well – unemployment is low, spending is high, and the stock market is coming off a great year.  But there’s an asterisk: Inflation.

The impact of the stimulus on the American consumer was nothing short of remarkable, with retail sales surging 22% above pre-Covid levels in just 15 months. 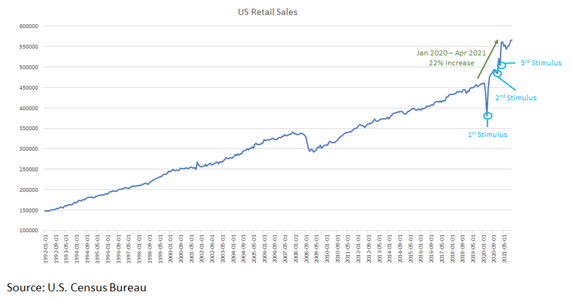 That increase was more than the sales growth in the previous 5 years combined.  Surging consumer demand coupled with supply chain shortages laid the foundation for the high inflation numbers reported at the end of the year.  Simply, too much money was chasing too few goods.  Americans had free money and they wanted to buy stuff.

WHAT DOES THE FEDERAL RESERVE HAVE TO DO WITH INFLATION?

The Federal Reserve has been in the news because of their December 15,2021 decision to shift monetary policy in response to rising inflation.

The Federal Reserve has two mandates – strong employment and price stability.  It does this by managing the nation’s system of money and credit.  This is a big balancing act, as the two “sit on a see-saw.” 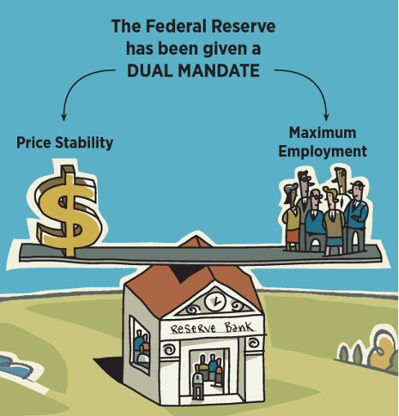 They’ve been really good at the employment component as the unemployment rate has dropped from 14.7% to 3.9% in just 21 months.  As for the price stability mandate, not so much.

In all fairness, they don’t have the most spectacular weapons to fight the fight against the inflation problem.  The Fed’s two main tools are setting short-term interest rates and buying Treasury bonds to (both of these are really important to banks and the overall economy, which trickles down to the individual).  Contrary to popular belief, no, the Federal Reserve isn’t “printing money.”  They can’t print money or take money back.  That would be a much better weapon against inflation.

When the economy shut down in March 2020, they took extraordinary measures to avoid a deep recession by lowering rates to near 0% and buying $75 billion of Treasury bonds per day.  This was reduced to $80 billion per month from June until December, when it was decided that the bond buying program would end in March 2022.  When that happens, they will likely consider raising rates and return to a more neutral monetary policy aimed at slowing inflation.  That sounds like a lot of jargon (and it is) but keep in mind the see-saw analogy of the Fed’s mandates.  The Fed is wanting to balance out the see-saw.

BAD NEWS HAS A SILVER LINING

The first is the economy is doing really well.  A move to more neutral monetary policy by the Federal Reserve indicates confidence that the economy is strong enough to grow without extreme stimulus.

The second is the actual acceleration of the rate of inflation.  In November, inflation increased 0.6% month-over-month.  In December, the rate of change was 0.5%.  If acceleration can continue to slow, it would be a good sign, even if high inflation sticks around for a few more months.

It’s difficult to imagine functioning in today’s world without credit. Whether buying a car or purchasing a home, credit has become an integral part of our everyday lives. Having easy access to...

5 Ways To Save For Your Next Vacation

For many of us, last week was fall break. And many are already dreaming about their next vacation. October is Financial Planning Month, and I want to help you financially plan for your next vacation...

If you’ve talked anything market related with me, you no doubt know I love charts. I think you can learn so much and increase your understanding from them. Here are four charts I’ve been looking at...

Our fifth episode of Money Minute featured our very first question from a follower: How do you efficiently pay off debt?